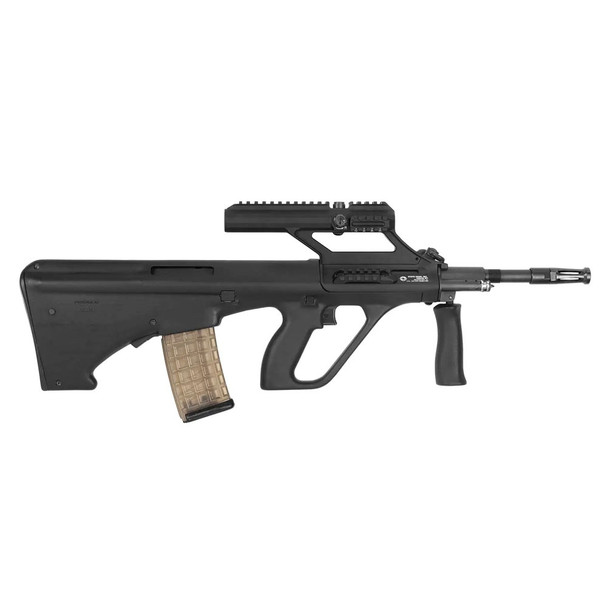 The iconic bullpup-style Steyr AUG has been one of the most recognizable rifles in the world since its adoption by the Austrian army in 1977 and is now available for civilian use as the Steyr AUG A3 M1, a semi-convertible ambidextrous rifle platform with an adjustable short-stroke, gas-piston operation chambered for 5.56x45mm (.223 Remington) ammunition in stock 30-round magazine.

The AUG A3 M1 Optics version has a traditional AUG scope tube with exceptionally bright and clear optical elements, modernized with the addition of three Picatinny rail sections to accommodate accessories like a close-quarters holographic sight. The optics platform is interchangeable via the three base screws that thread from the underside of the top of the receiver.

The AUG A3 M1 boasts an overall length of just 28.15 inches, including its 16-inch heavy barrel, making it at least 8 inches shorter than an M4 carbine with a comparable-length barrel. The short-stroke gas-piston operation of the AUG runs exceptionally cleaner by nature because all of the operational exhaust gas vents out of the front of the rifle. The AUG's matching, yet opposed, stainless steel operation and guide rods affixed to the bolt carrier glide effortlessly inside the receiver for unparalleled smoothness in operation as well as exceptional reliability. Dual gas-adjustment settings ensure its operation, even with the dirtiest ammunition and in adverse conditions.

The AUG A3 M1 has all the classic features and benefits that established it as the pinnacle of modern rifle design, including expedited disassembly as well as simple conversion to left-hand operation, which requires replacement of the standard bolt with the optional left-eject bolt and swapping the ejection-port cover. It also features a quick-change barrel with a collapsible forward grip as well as a two-position cross-bolt safety that locks the trigger.

The receiver was also updated to replace the permanently affixed front sling swivel with a VLTOR Quick-Disconnect Sling Swivel, which makes two-point sling attachment or removal extremely fast and easy, and users of single-point slings can remove the front sling swivel entirely, if they so desire.

MSRP:
Now: $1,749.00
$2,199.00
Bullpup system moves the action and the magazine back behind the trigger, reducing the overall length drastically while still retaining effective downrange performanceQD mount points on both sides of...

MSRP:
Now: $1,199.99
$1,345.00
30 round magazineSide Folding StockFlash SuppressorHinged top cover with Picatinny rail The KR-9 SBR is the American-made short barrel rifle based upon the Vityaz-SN submachinegun design used by...

MSRP:
Now: $17.50
Brings shooters the reliability and quality of ammunition built to SAAMI standardsBacked by stringent ISO certified quality systemsLoaded in reloadable brass cases for added valueLoaded with a...

MSRP:
Now: $1,200.00
Synthetic StockAdjustable SightsMuzzle Brake The KR-103SF SX is an all American made AK based off the AK100 series design overseen by Mikhail Kalashnikov. The 103FT is chambered in 7.62x39, accepts...