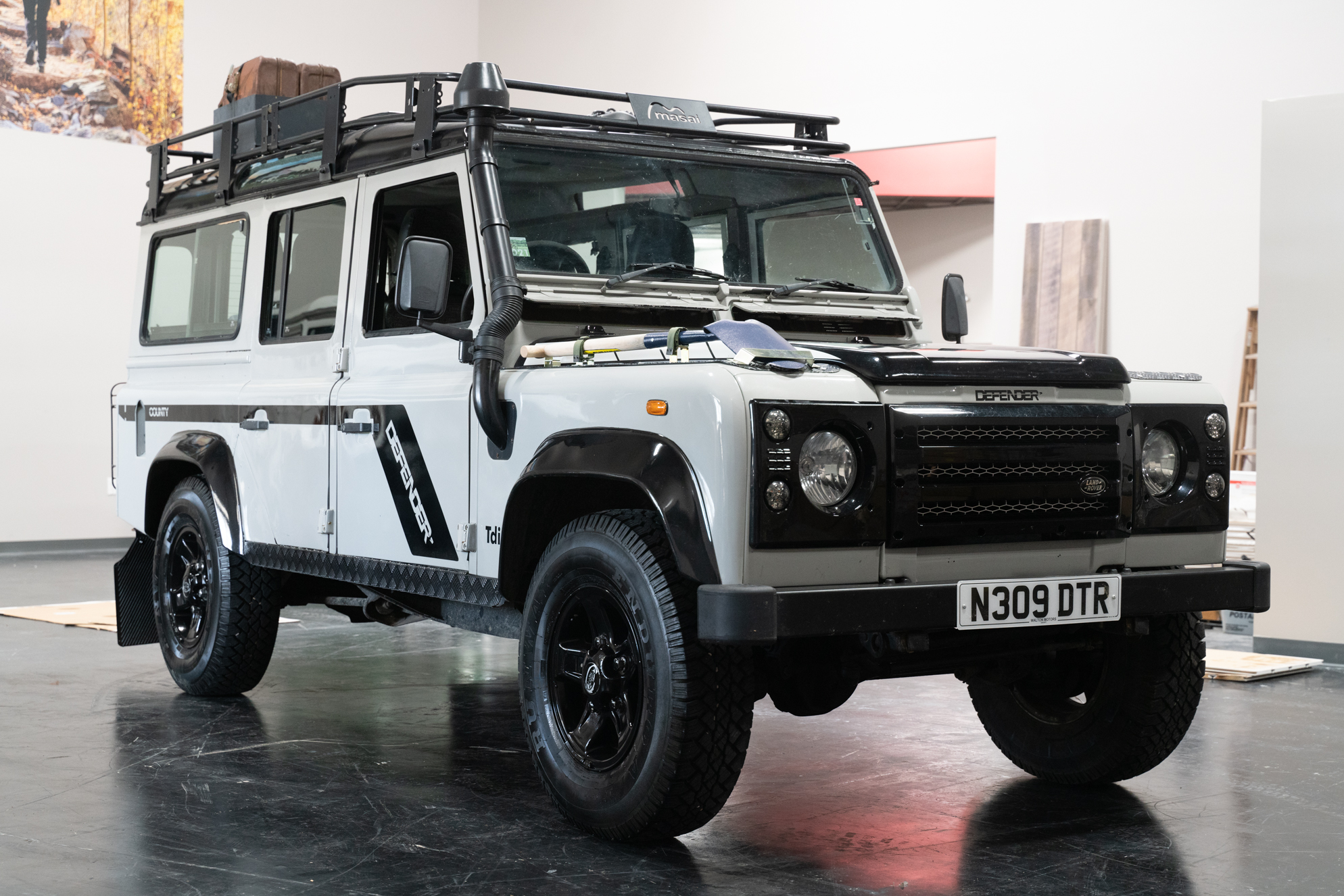 This 1995 Right Side Drive Land Rover Defender 110 is finished in white over a grey interior and is powered by a 300Tdi engine paired with a five-speed manual transmission and a dual-range transfer case. Additional equipment includes Runway Enduro A/T tires and a matching spare with the signature case, Masai roof rack with ladder, two fuel containers with an attached case, a pair of recovery tracks, a snorkel, a shovel, folding rear jump seats, and an aftermarket security immobilizer. The vehicle has recently been imported from the UK. 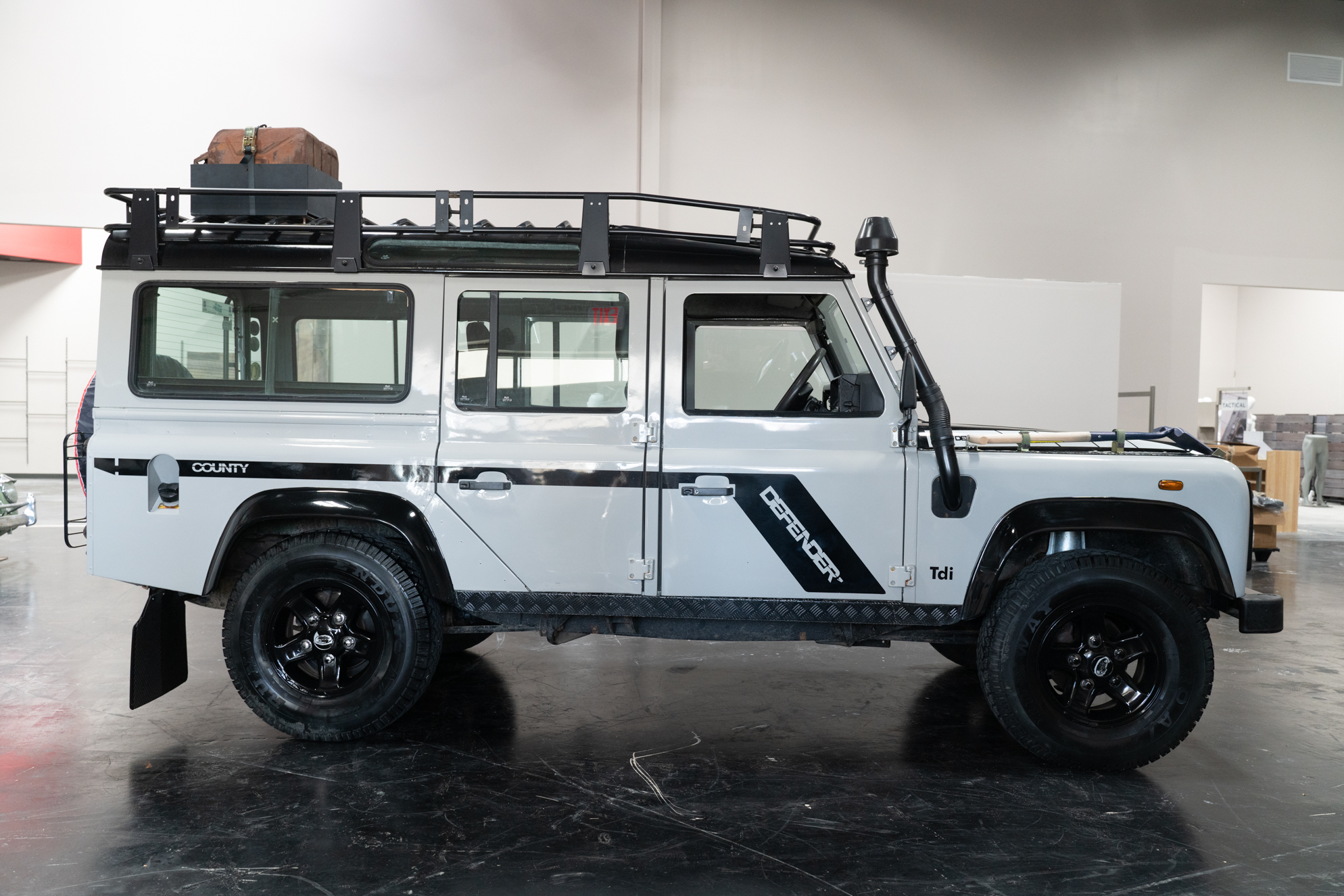 The truck is finished in White with Defender graphics and a black roof rack. Additional exterior features include adjustable side mirrors, black wheel fender flares, checker-plate aluminum trim on either side of the bonnet and along the sills, black steel bumper, black front grille, and surroundings, and LED side marker lights. The pre-installed snorkel will come in handy when wading through water or crossing sandy terrain. 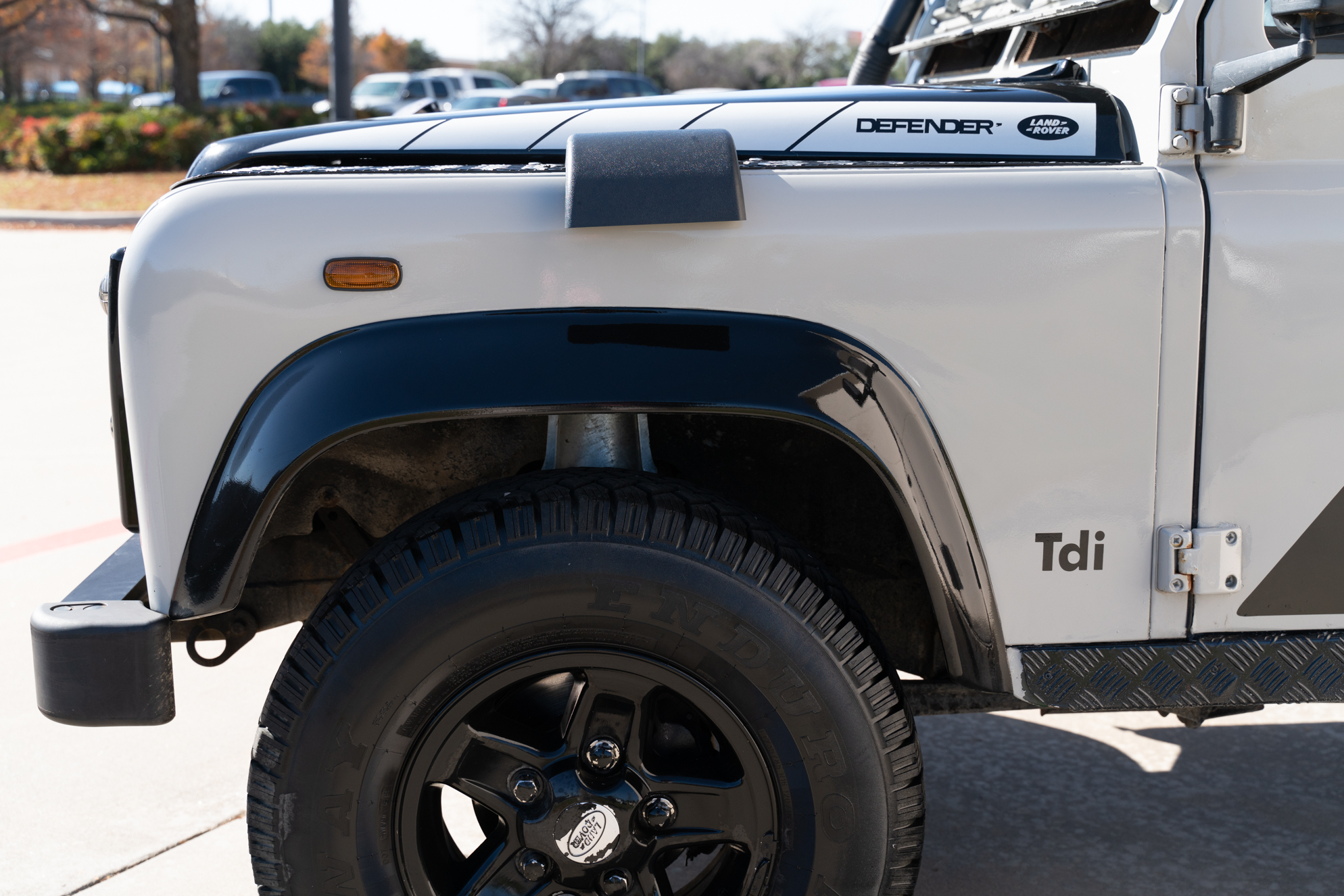 16″ wheels are mounted with 235/85 Runway Enduro A/T tires designed specifically for the all-terrain application. They are indispensable for driving through mud and snow and are created to be all-season tires. 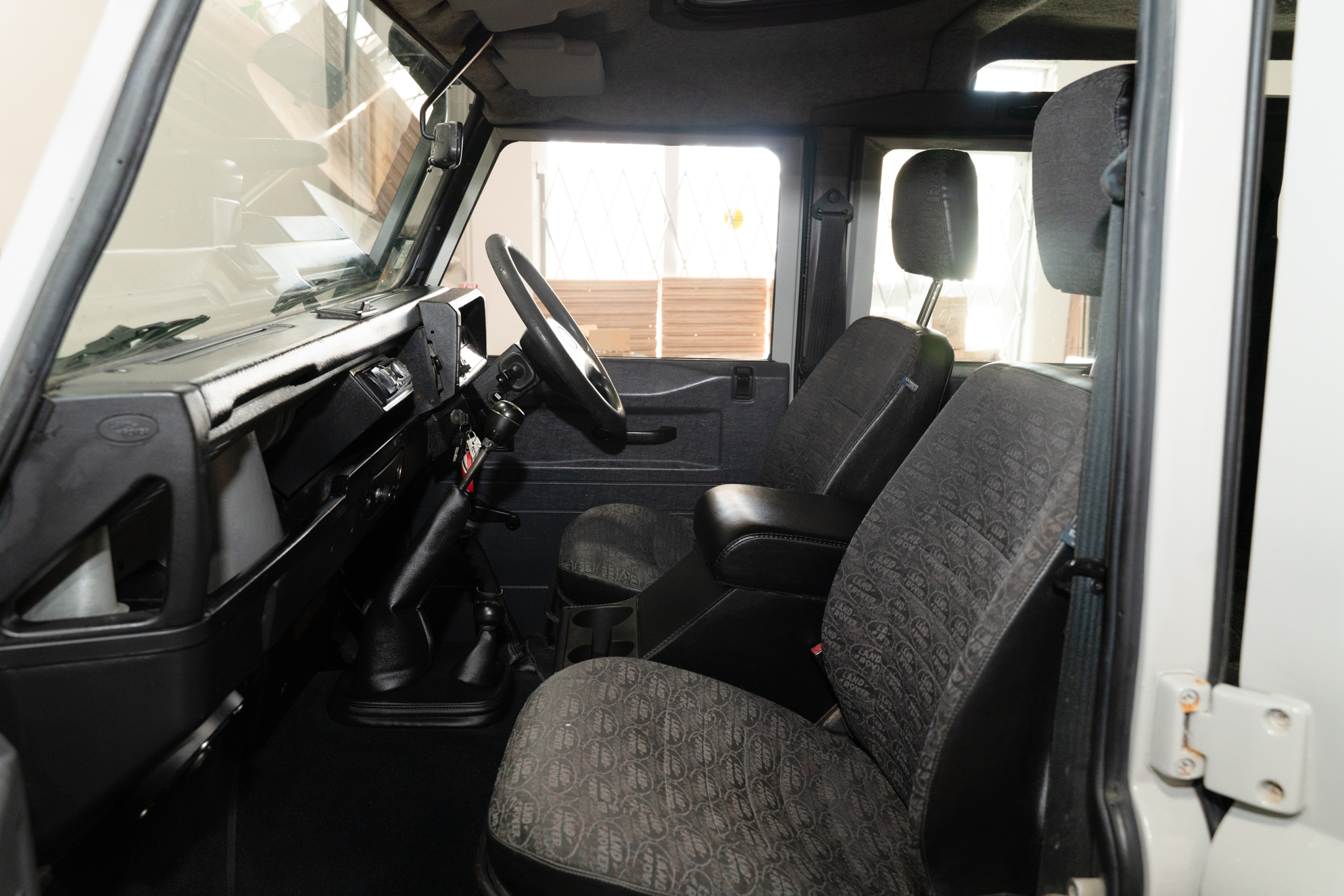 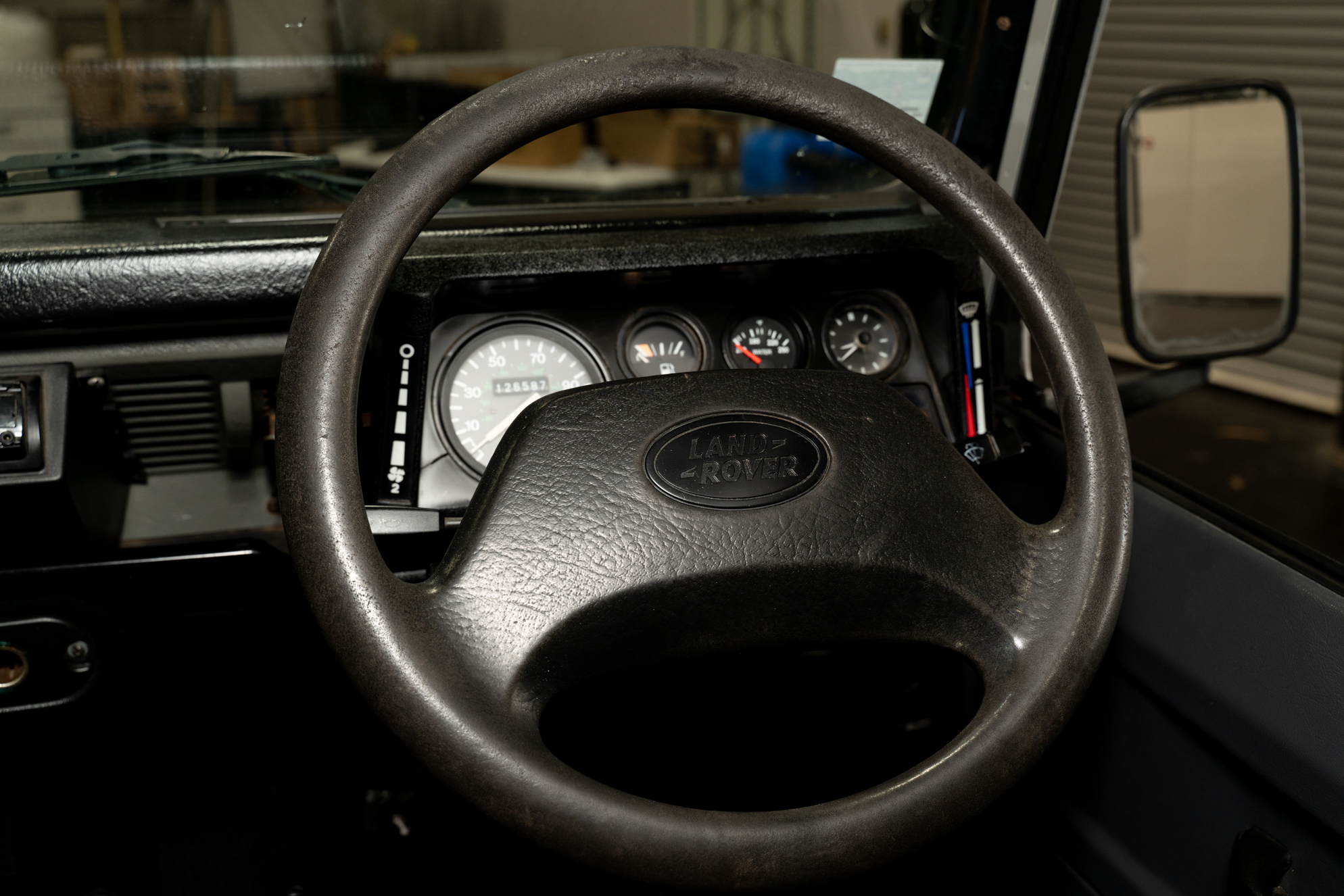 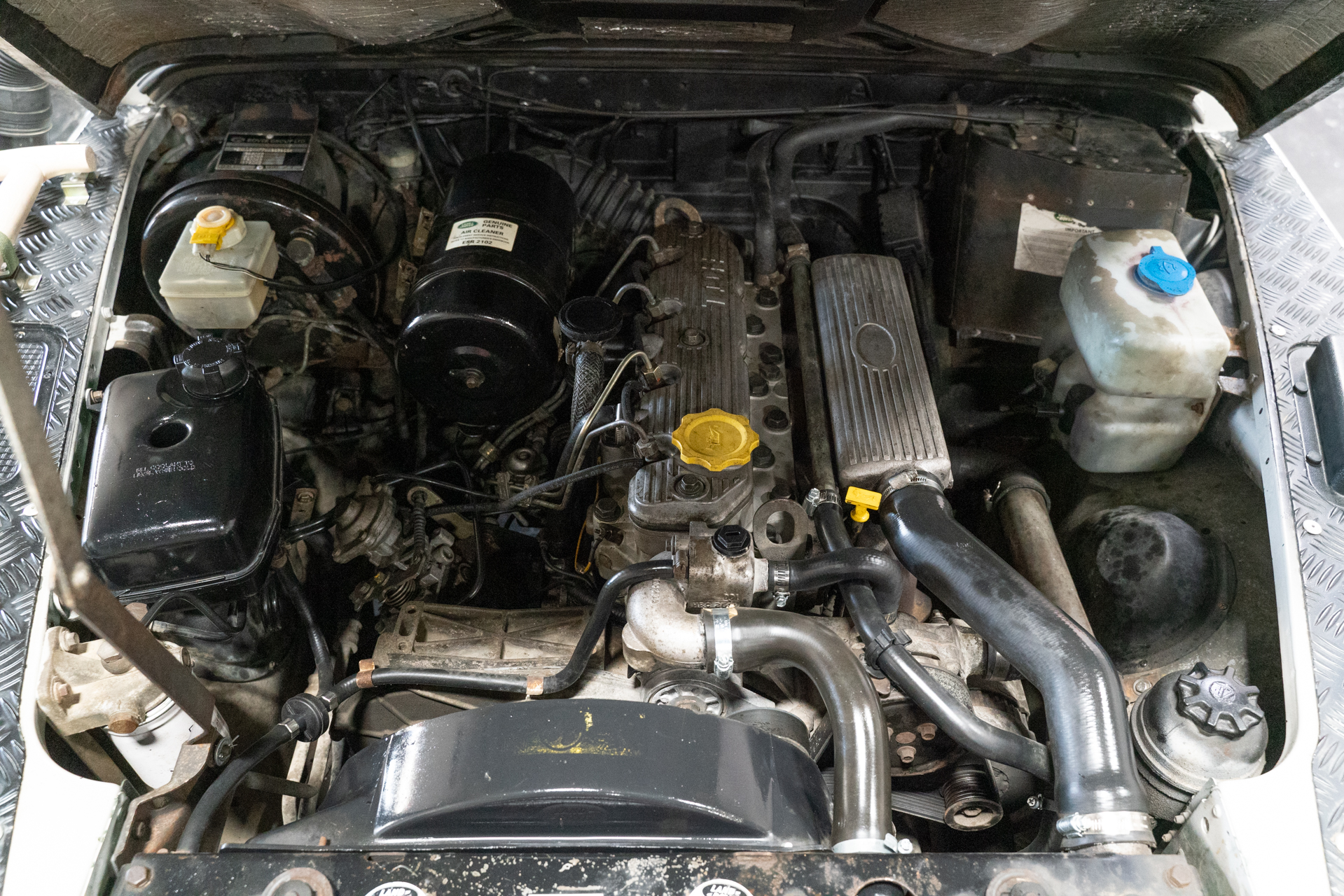 The 2.5-liter 300Tdi inline-four engine is rated at 111 horsepower and 195 lb-ft torque. The car is installed with an aftermarket security immobilizer to prevent potential hijacking. 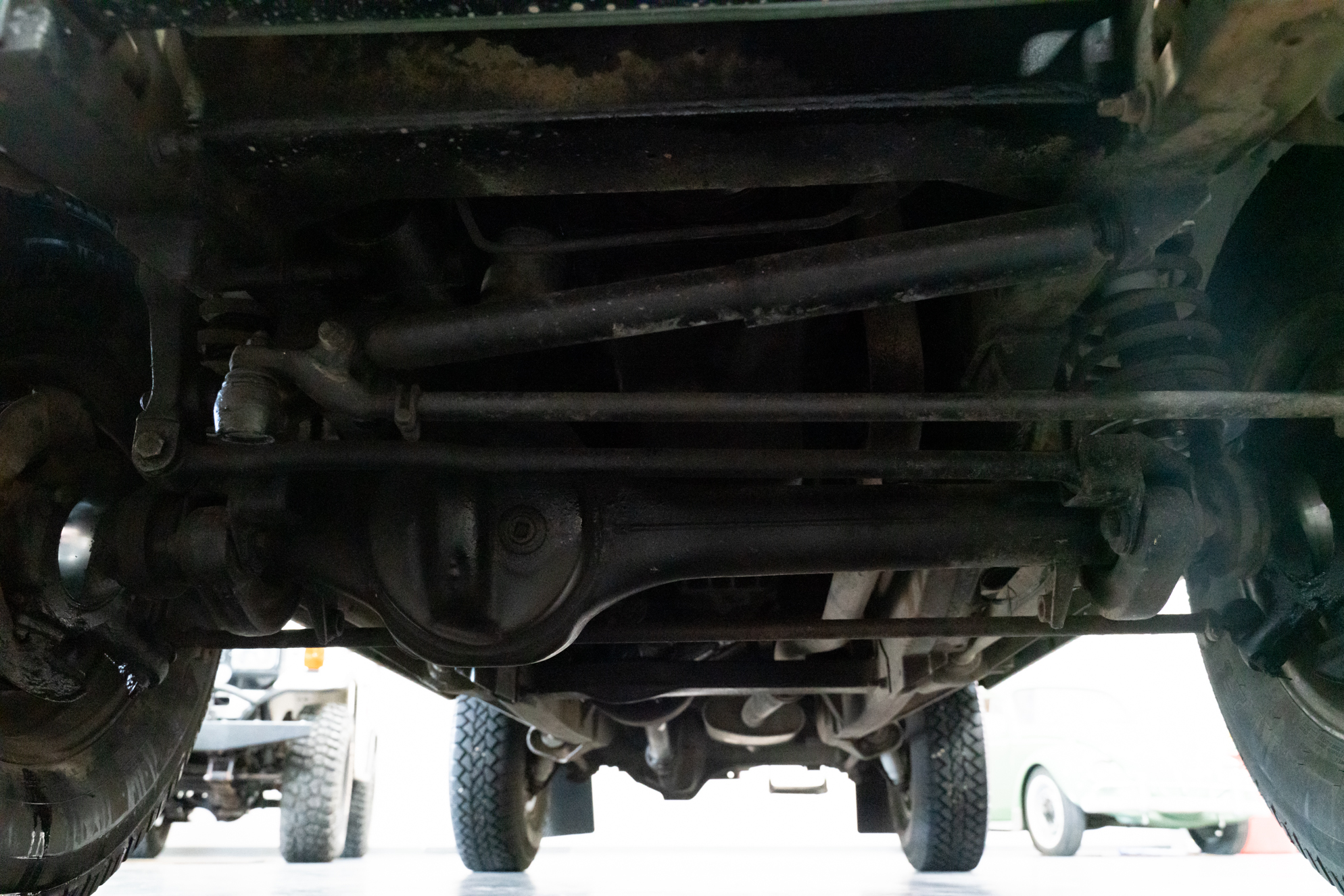 Power is sent to wheels through a five-speed manual transmission and a dual-range transfer case. The dual transfer case adds an additional low-range reduction gear set to your vehicle. The differential lock allows the driver to lock front or rear drive shafts to cross harsh terrain. 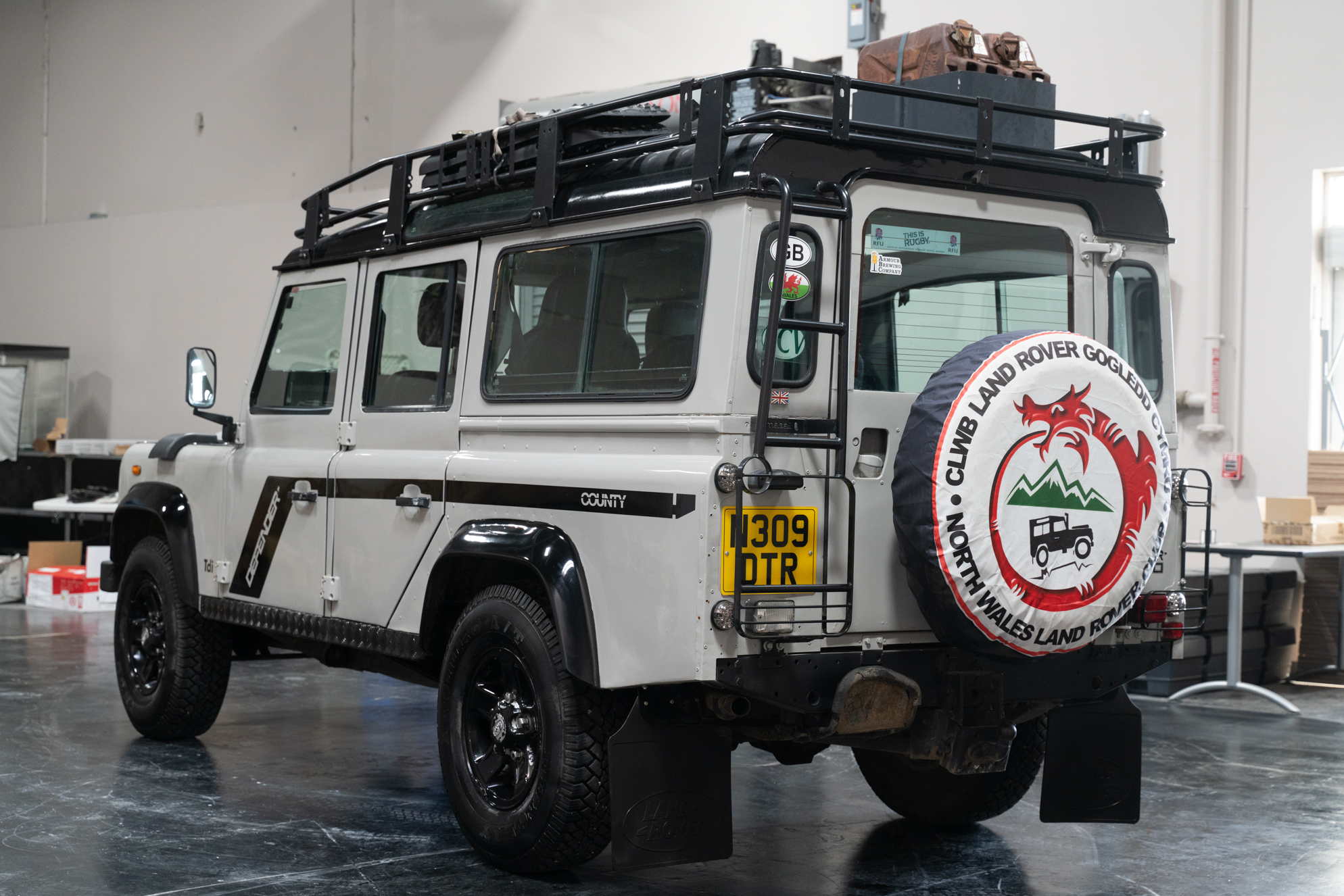 This is a used Land Rover Defender, as you can see from the pictures. Door handles have seen better days, rust has covered some metal parts, and the engine is by no means brand new. But this is a Defender 110 with a story. A story hidden in old car seat covers, in weathered stickers, that kept their eyes on the rear, in numbers on the odometer, once miles of open roads and impassible terrains. A story of trips over Great Britain. If you want to learn this story, don’t be hesitant. Should you want to open a new chapter, only one press of a button keeps you away from it. We still have this Land Rover Defender for sale.

What is the difference between a Land Rover Defender 90 and 110?

You can sleep anywhere if you put your mind to it. But if you want to spend a night comfortably, Land Rover Defender 110 can give you this opportunity. The cargo area is equipped with jump seats that can fold and give you enough space to place an air mattress, and there is a row of back seats that can place one person.

Yes, Defender 110 and 90 were permanent four-wheel-drive vehicles capable of providing torque to all of its wheels simultaneously.

Why was the Land Rover Defender discontinued?

It failed to meet new safety standards introduced in 1997 and to do so the whole vehicle needed to be redesigned. That’s why BMW decided to discontinue the Defender series in 1997.

What is the best Land Rover Defender engine?