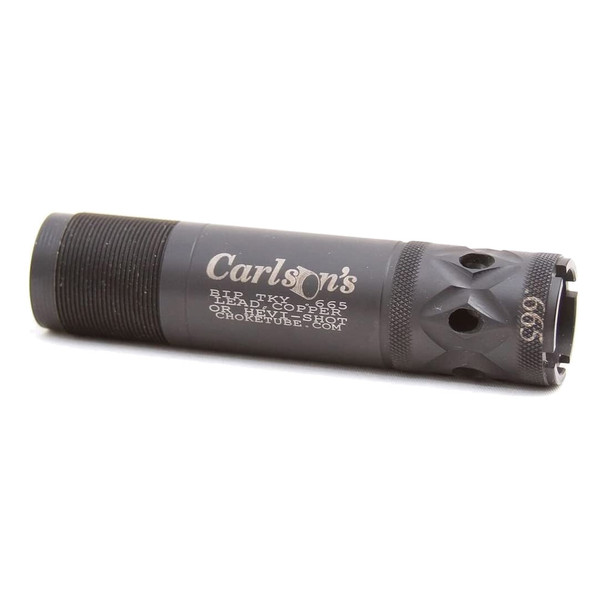 This Carlson's Long Beard XR Browning Invector Plus Turkey Ported Choke Tube has been specially designed to produce the best patterns when shooting Winchester's Long Beard Turkey loads. This ammunition features Shot-Lok Technology that allows for the tightest patterns and longer downrange reach over any lead turkey load on the market. Pair this ammunition's capabilities with the Carlson's Long Beard Turkey Choke and you have a devastating, gobbler-killing combination.

This tom-dropping dynamic duo serves-up 10% greater penetration over standard lead shot at distances of more than 50 yards, terminal on-target performance and allows nearly perfectly round shot to be thrown from the barrel for extremely tight, long-range patterns.

When you head to the turkey woods, give yourself better reach and down-range performance by using Carlson's Long Beard Turkey Choke with your Winchester Long Beard Shotgun Loads. It's a killer combination that's sure to drop that big old gobbler when the music stops.

MSRP:
Now: $31.00
Fits CZ75Machined from 6061 T6 aluminum billetType 2 hardcoat anodize finish for abrasion and corrosion resistanceTorx head screw and washer for retentionDesigned and made in the USA Warne Handgun...

MSRP:
Now: $15.72
Great for a quick clean when you don't have time for a deep cleanCleanses and lubricates in one stepCleanser evaporates in 60 secondsLeaves an extremely thin layer of lubeLubricant utilizes the...