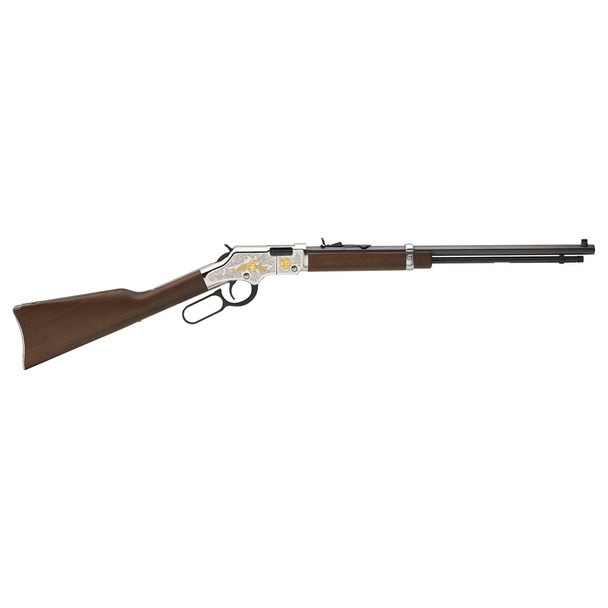 In 2016 Henry built a limited run of 2,000-unit Golden Boy NRA Second Amendment Tribute Edition Rimfire lever actions for Friends Of The NRA to salute the organization's contributions during its 145 years of service in Henry's behalf, and Henry felt so strongly about the matter that Henry decided to bring it back in 2017 as a general-issue cataloged model for everybody who wants one.

The receiver cover, barrel band, and carbine-style buttplate are all brightly-polished in a hi-gloss silver-toned finish, and the cover is embellished on both side flats with 19th Century floral engraving set off by 24K gold plated and raised-relief symbology that includes on its right side a flintlock rifle above the now-famous FROM MY COLD DEAD HANDS statement made by Charlton Heston, NRA president from 1998-2003, at the 2000 NRA convention, and on the smaller panel the NRA Seal.

On the left side, a gold American eagle in flight, the Second Amendment in a gold shield, and the Bill Of Rights in a gold scroll.

MSRP:
Now: $396.00
18.5in Round Blued Steel BarrelBlade Front SightFully Adjustable Rear Sight1/4 Cock SafetyBlack Ash Stock The HENRY Garden Gun Smoothbore Lever-Action Rifle is one that belongs right by your side as...