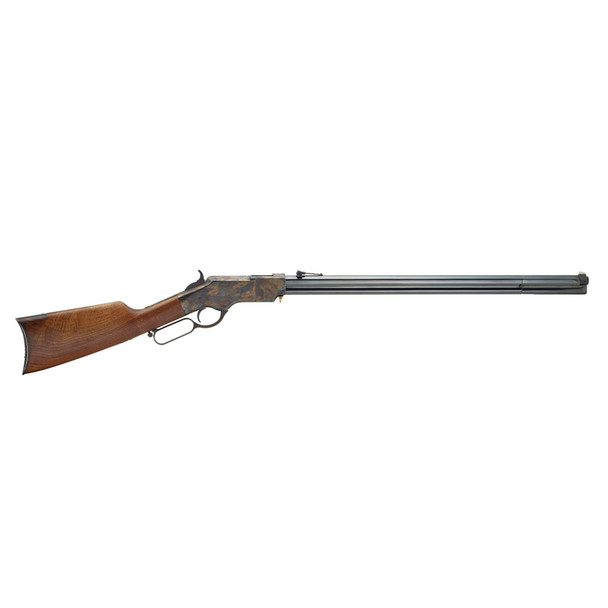 Getting your hands on a civil war era Henry rifle will set you back up to $250,000 if you can find one at auction. Getting your hands on the ultra-rare iron-framed Henry. Almost impossible no matter cost. The iron-framed 1860 Henry rifle was manufactured in less than 400 units, and the HENRY Original Iron Frame .44-40 Win Lever-Action Rifle makes it possible to acquire your own example of this short-lived piece of history.

A pioneering design in a reliable and practical lever action repeater, and adopted in limited numbers during the civil war, the Henry was the 16-shot rifle referred to as the rifle you could load on sunday and shoot all week long.

In the days when the average soldier was expected to be able to fire up to three rounds per minute through his muzzle-loading Springfield rifle, a small unit armed with Henry rifles could provide the firepower of an entire company. That ground-breaking lever action rifle design was the foundation for a uniquely American class of long guns that's still with us today, over 155 years later.

Building off of the desirability of their first brass-framed original Henry rifle, they've reincarnated those rare iron-framed rifles, made entirely on US soil, just as B. T. Henry's rifles were. Their iron-framed Henry Original is true to Henry's 1860 patterns and patents, and virtually identical aside from concessions necessary to adapt to the 44-40 centerfire rounds that replaced the long-obsolete rimfires. This model rifle uses a thoroughly modern steel receiver with a striking color case hardened finish and a matching period correct crescent buttplate. These are fitted with a one-piece blued steel octagonal barrel and magazine, fancy grade American walnut stocks, a classic folding ladder rear sight and blade front, traditional half-cock safety hammer notch, and no modernized manual safeties. The barrel is a full 24-1/2 inches with a 13 round capacity.

This is your chance to own, shoot, and display one of the most important rifles ever made in its rarest form.

MSRP:
Now: $890.00
$1,100.00
Regular LeverStraight GripWeaver 63B Scope Mount Henry Repeating Arms is one of the top-five long gun manufacturers in the USA. Henry offers a line of classic, well-crafted firearms that every...