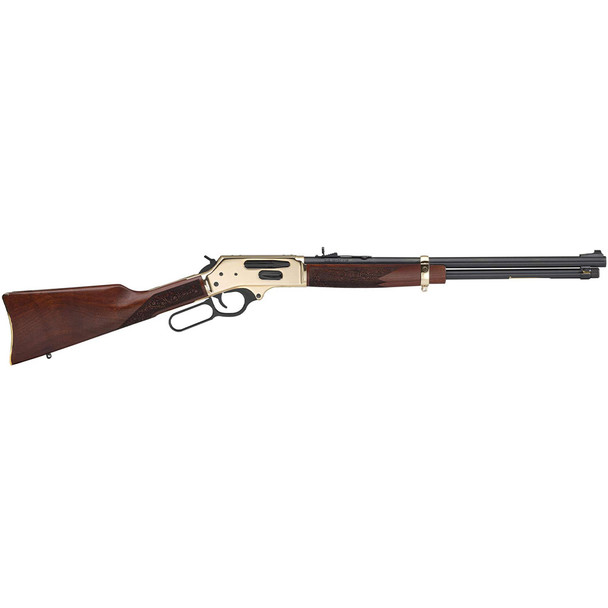 Made In America And Priced Right. Henry Repeating Arms takes its name from Benjamin Tyler Henry, the man who patented history's first repeating rifle in 1860. In honor of this iconic inventor, the modern day firearms manufacturer resurrected the Henry name in 1996 and currently produces their rifles in two different plants -- one located in Bayonne, New Jersey and the other in Rice Lake, Wisconsin.

Today, Henry ranks as the number five leading long-gun producer in the United States, quite an impressive accomplishment considering the company doesn't even produce shotguns, bolt action hunting guns or tactical firearms, but rather specializes in nostalgic lever and pump action rifles.

Inspired by the original Henry rifle, the Big Boy is a Western style lever action centerfire capable of rapid, accurate shooting. Any fan of John Wayne will immediately recognize the profile and styling of this gun. The rifle has a nice heft, with a distinctive look popular among Old West enthusiasts. A stunning solid top brass receiver, buttplate and barrel bands make this gun really stand apart from the rest.

Owing to its huge popularity is the fact that the Henry is entirely made in the U.S.A. Loading is fairly straightforward -- simply twist the magazine cap and remove the inner brass magazine tube, then begin dropping rounds in through the loading port. Admittedly, dropping rounds down a magazine tube isn't the fastest way to load a rifle.

However, it certainly beats getting your fingers caught in a loading gate and if you can't down an animal in ten rounds, you probably need to give up hunting. Once fully loaded, replace the inner magazine tube and twist lock it back in place.

A 20" round barrel has machined with state-of-the-art multiple groove rifling that provides excellent down range accuracy. Adjustable rear Marbles semi- buckhorn sights are are paired with a bead front sight that tracks extremely well. All steel parts, such as the barrel and lever, wear a deep blued finish. Weighing in at 8.68 pounds, the rifle has a solid feel but is still fast handling.

The straight grip buttstock and forend are a deluxe American walnut that give this rifle a very pleasing and stylish appearance. While the rifle lacks a manual safety, it does have a have a half-cock safety that acts as a firing pin block, and a transfer bar safety that prevents the gun from being discharged unless the hammer is cocked all the way back, then trigger depressed. The rifle automatically returns to a safe position if the hammer is lowered manually.