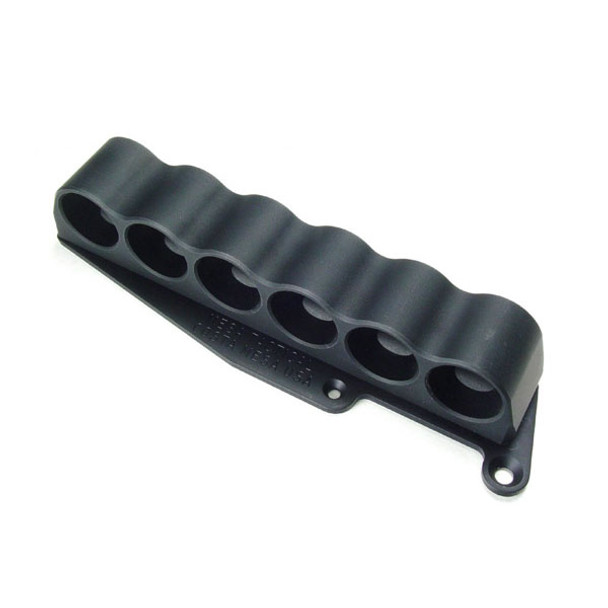 Most of Mesa-Tactical's SureShell shotshell carriers mount directly to the receiver of leading shotgun platforms.

These SureShell shotshell carriers retain ammunition reliably and, being metal, can withstand the rigors of daily use and abuse. Fabricated from aircraft aluminum, they feature an innovative rubber friction retention system and tough construction to endure years of use and abuse.

SureShell carrier yokes are milled from 6061-T6 aircraft aluminum, then bead blasted and Mil-spec hard anodized for a rugged non-glare finish. SureShell yokes are secured to application-specific brackets, and some SureShell carriers include high temperature adhesive-backed die-cut rubber gaskets to protect the host shotgun's finish. A unique arrangement of threaded fasteners secures the shell holder to the shotgun receiver without the risk of stripping threads in the aluminum bracket.

The receiver mounting scheme of Mesa Tactical's receiver mount SureShell carriers for the Remington shotguns uses a combination of steel fasteners threaded into a steel pin (at the rear) and paired Chicago screws (up front) for more secure attachment to the shotgun without the risk of pinching the receiver. The mounting plate even features a window over the shotgun serial number location, to make it easier for armorers to inventory their weapons. Note that SureShell shotshell carriers cannot be installed on the right side of Remington semi-auto shotguns.