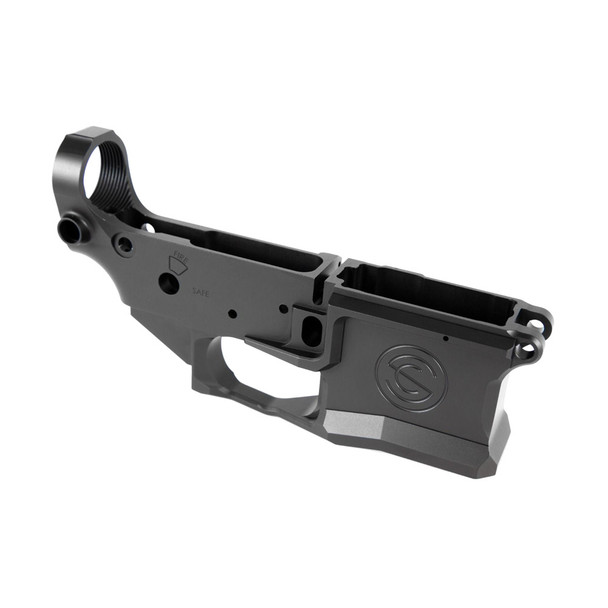 The Silencerco SCO15 Billet For AR-15 Lower Receiver (SU4766) is made from billet 7075-T6 aluminum, it is precision machined for compatibility with all of your preferred parts. The lower receiver is finished in a type III hardcoat anodize for added durability and corrosion resistance.

The design includes a proprietary ambidextrous bolt catch, integrated enlarged trigger guard, and ambidextrous multi-position sling swivels as well as various other features. With the SilencerCo Billet AR-15 Receiver, you get the materials, finish, and features you want and need to complete your dream AR-15 build.

The SilencerCo SCO15 provides a lightweight yet durable AR-15 lower receiver for your next rifle build. With its sleek design and upgraded features, the SCO15 is optimized for compatibility on your dream gun. Featuring a proprietary ambidextrous bolt catch, flared mag well, and an enlarged trigger guard, SilencerCo pulled out all the stops for functionality and dependability.

Using their state-of-the-art in-house machining, SilencerCo is known for their quality and longevity with not just their suppressors, but now their firearm parts. Constructed of 7075 aluminum, with a 3D printed 17-4 stainless steel bolt catch release, this AR-15 stripped lower receiver is reliable and robust without adding too much weight onto your build. With the integral ambidextrous anti-rotation QD sling cups built into the SCO15 design, this SilencerCo Lower Receiver is the perfect addition to your next AR-15 build.

MSRP:
Now: $269.00
$284.99
Precision machined from 7075-T6 forgings and Type3 hardcoat Anodized, Class2 deep BlackPacked with 'above milspec' features that makes it the ideal choice for shooters looking for an enhanced...

MSRP:
Now: $68.82
For Mil-Spec Stripped AR-15 lower ReceiversBlack Oxide SpringsMade in the USA Every part you need to assemble your bare lower receiver into a functional piece for your custom AR-15 or M4 build. This...