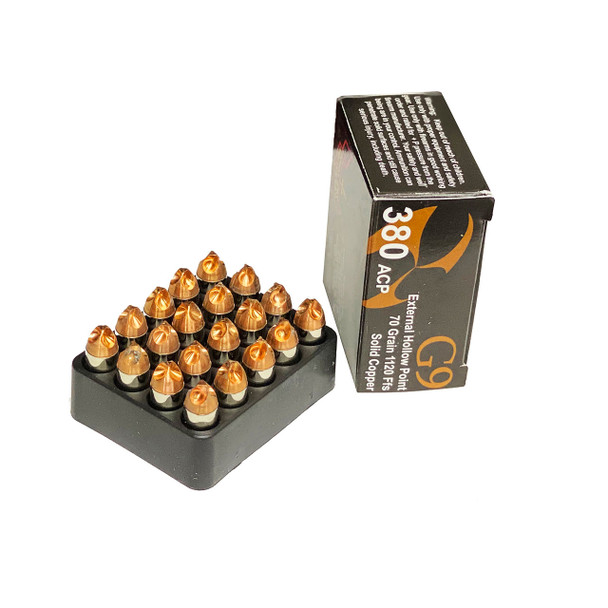 The G9 AMMO 380 ACP EHP 70 Gr Ammo (380ACP-70) was developed with defense in mind. Nothing should stand in the way of your ability to defend yourself and your own. The External Hollow Point bullet features proprietary geometry on the exterior of the projectile that produces a "Barrier Blind" capability and extreme wounding as it goes through the target.

The uniquely shaped tip allows penetration of common barriers such as windshields, drywall and vehicle sheet metal with no projectile deformation.

While designed to cut through hardened materials, the EHP round slows quickly in tissue to prevent over-penetration. The shape of the External Hollow Point is engineered to immediately transfer the maximum amount of energy laterally upon impact with tissue, creating a bursting-type entrance wound, large temporary cavitation and a controlled depth of penetration not seen in Full Metal Jacket (FMJ) or conventional Hollow Point (HP) projectiles.

In addition to reliable penetration and immediate energy transfer into the target, the lightweight EHP projectile greatly reduces felt recoil, allowing for rapid follow up shots.

Every aspect of the G9 External Hollow Point has been scrutinized and engineered to produce the best carry ammunition for a defensive handgun. As a responsible citizen, your training should include scenarios that are realistic. The ammunition you select should be up to the job as well.

MSRP:
Now: $46.99
$53.99
This product is constructed of non-lead material in a way that makes it come apart at an astounding rate—providing for some great acrobatic reaction on varmints The FEDERAL Premium Ammunition, 22...

MSRP:
Now: $15.50
$19.90
Great for the backyard plinker or competition shooterAccurate, consistent ammunition that are loaded to ideal velocities for best performanceClean burning propelants to keep your action cleaner The...