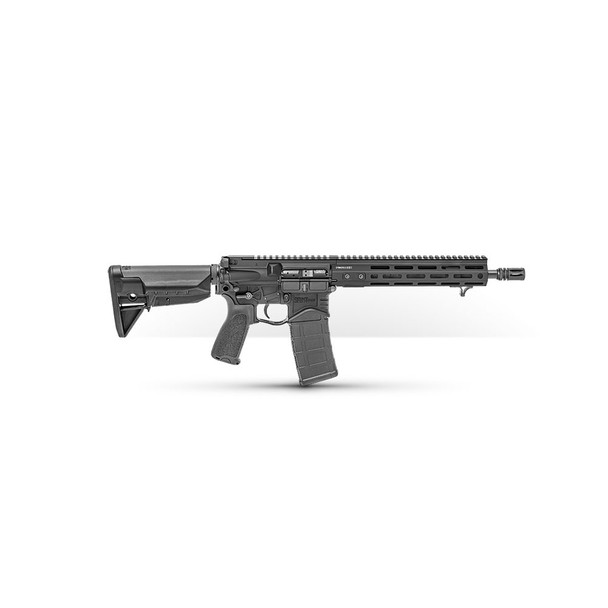 Springfield Armory's Saint AR-15 series expands to include the SPRINGFIELD ARMORY Saint Edge 5.56mm 11.5in 30rd Semi-Automatic Short-Barreled Rifle (STE9115556B), featuring an 11.5" CMV light-weight profiled 1:8 twist barrel that is Melonite finished inside and out for the ultimate in corrosion resistance. This configuration was selected as the best balance between length and ballistic performance of the 5.56 cartridge.

The Saint Edge SBR, with its lightened billet lower, provides superior accuracy thanks in part to a free-float handguard featuring Springfield's rock-solid proprietary attachment system. With four attachment points anchoring it to the barrel nut, this M-Lok compatible handguard was designed to withstand the hard use of law enforcement and military operations. Under the handguard is Springfield's pinned multi/mode adjustable gas block for suppressed or unsuppressed use.

Machined from aircraft grade 7075 T6 aluminum and Type III hard coat anodized, the lower receiver is equipped with the Accu-Tite tension system, which reduces movement between the upper and lower receiver. No corners were cut on the MPT (magnetic particle tested) enhanced M16 bolt carrier group – the heart of any premium AR. This BCG is finished with super-hard Melonite and carries a 9310 steel bolt.

For those looking for light, tight and quick-handling short-barreled rifle with top quality features throughout, the Saint Edge SBR with its lightweight billet-lower receiver is the ultimate hard use combat carbine.

MSRP:
Now: $1,199.00
One of the lightest AR-15s on the market16" Carbon Steel barrelPatent-pending free float handguardBillet receiver with lightening cuts for effortless operationFlip up front and rear low profile...

MSRP:
Now: $414.99
Optics ReadyComes with two standard capacity magazines The Masada Slim is the continuation of the Masada line of pistols. Developed with a thin profile and compact design, it allows for ease of...

MSRP:
Now: $699.00
Pro-Cut Slide Allows for Simultaneous Optics and Rear SightRomeo1Pro / Deltapoint Compatible Optics Floorplate Ergonomics and performance have become the standard of the P320 XSeries. Now, all of...